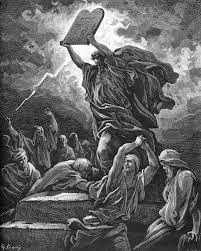 This Sunday (July 24th, 2016) is the 17th of Tammuz. It is a fast day that commemorates five tragedies as described in the Talmud (Tractate Ta’anit 26b). The Talmud states that the first tragedy was the Sin of the Golden Calf. After the Children of Israel miscalculated the time/date for Moshe’s return they built a Golden Calf. Meanwhile, Moshe was receiving the Torah on Mount Sinai. He came down carrying the Ten Commandments, crafted and written by the Finger of God. As Moshe saw the Golden calf he smashed the tablets. That date was the 17th of Tammuz.

Also on this day the Korban Tamid was stopped - the daily offering of two sacrifices one in the morning and one in the afternoon. This was because the siege of Jerusalem was so severe that they had ran out of lambs to offer for the Korban Tamid.

The third catastrophe was the walls of Jerusalem were breached during the Second Temple under the Romans led by Titus who later became Emperor Titus. Jerusalem was breached on the 9th of Tammuz when the First Temple was destroyed by The Babylonians.

During the Greek oppression before the Hasmonean Victory and the Miracles of Hanukah, a Greek General called Apostomus burned a Sefer Torah. This was the first recorded instance of book burning and led the way for all the book burnings throughout our history. There is a debate if Apostomus was actually a Roman in a later time period. Have a look here.

And finally an Idol was placed in the Temple. There is a dispute whether this was done by the evil Jewish King Menashe during the First Temple Period or whether it was done by Apostomus during the Greek persecutions during the Second Temple period.

These five reasons each in their own right would make for a day of fasting for the Jewish People but together they make this day the second saddest day in our calendar. This day is also three weeks before the 9th of Av which is the saddest day of our calendar. I will write more about that day in the coming weeks.

As we enter this period of the three weeks our Ashkenazic brothers and sisters take on a number of mourning practices. The vast majority of Sephardim (except Moroccans) don’t have mourning practices until the week of Tisha B’Av.

Nevertheless this is a sad period in our calendar and it is time when mitzvah observance specifically better relationships between man and his fellow are emphasized. Wishing you all a meaningful Fast of Tammuz. May our fasting, sincere repentance and improved mitzvah observance see an improvement in the situation in Israel.
Posted by askrabbihassan at 17:01