What was the Point of the Plagues? 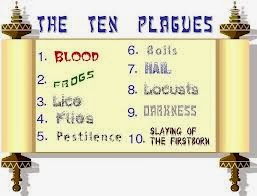 What was the purpose of the plagues? If Hashem wanted to redeem the Jews from slavery, wasn't there an easier and quicker way? Why ten plagues? Were they there just sent to free the Israelites, or was there more involved? Here's the source sheet from today's class based on a wonderful shiur by Rabbi Amnon Bazak available at vbm here.

When Hashem first speaks to Moshe at the burning bush it looks like the plagues are there just to take the Jewish people out of Egypt. "And I shall set forth My hand and I shall strike Egypt with all My wonders which I shall perform in their midst, and thereafter he will send you out." (Shemot 3:20)

It is quite clear that if the goal is just to take the Jews out of Egypt the 10 plagues would not be necessary that could be just achieved with the killing of the first born. Therefore we must look for other reasons.

Later in Shemot (4:21-23) it is to punish Pharaoh for subjugating the Jewish people. "And I shall harden his heart and he will not send out the nation. And you shall say to Pharaoh, So says God: Israel is My firstborn son. And I said to you; send out My son that he may serve Me. And you refused to send him; behold, I will kill your firstborn son."

In Shemot 7:5 a second reason is given. "And Egypt will know that I am God when I stretch out My hand upon Egypt and when I take Bnei Yisrael out from among them." So the aim of the plagues is to punish Pharaoh and Egypt and to bring an awareness of God into the world.

The 10 plagues themselves can be subdivided as Rabbi Yehuda does in the Haggadah. This is not just a mnemonic Rabbi Yehuda is expressing that there is something going on in each set of plagues that is different from the other sets.

One can group them as
Group 1: Blood, Frogs Lice
Group 2: Wild Animals, Cattle disease, Boils
Group 3: Hail, Locusts, Darkness
By itself: Killing of the firstborn

According to Rav Hirsch the first plague in each group (blood, wild animals, and hail) reduced the Egyptians in their own land to the insecure existence of strangers. The second plague in each group (frogs, pestilence, and locusts) robbed them of their pride, their possessions, and their sense of superiority, reducing them to lowly submission. The third plague in each group (lice, boils, and darkness) imposed upon them actual physical suffering. This was the retribution for their oppression of the Jews which had taken these same three forms; their punishment then reached its climax in the slaying of the firstborn.


The third group, finally, was to show the truth of prophecy; in connection with this group the Torah speaks of those 'who would not listen to God's word' (Shemot 9:21) and ‘in order that you will know that there is none like Me in all the land’

I think that there is another possibility for the plagues and that is that they are for the Jewish people to realize that they don't need to be slaves to Egypt anymore and that no person should ever be subjugated by another human being. But slavery was so ingrained in their psyche that God had to take them out gradually with 10 plagues so that they could see for themselves that they were entitled to something greater in life.

Shabbat Shalom
Posted by askrabbihassan at 15:17