The Power of Elul

This Tuesday and Wednesday are Rosh Hodesh Elul which means starting Thursday Sephardim will be saying Selihot every morning except for Shabbat until Yom Kippur. At SBH we will be starting at 6:00 AM every day. Elul is the last month of the year and starts our preparations for Rosh Hashana and Yom Kippur.

Why do we say Selihot during this time period?
What unique power is in this special month of Elul?

After the Jews sinned with the Golden Calf, Moshe smashed the two tablets that Hashem had given him. Two days later Moshe went back up the mountain for another 40 days to atone for the Jewish people. Moshe went up for a third time on Rosh Hodesh Elul and came down 40 days later on the 10th of Tishri with the Second Tablets. This 10th day of Tishri became Yom Kippur, the day that God forgave the Jewish people for the Golden Calf. This day became the annual day of forgiveness for the Jewish People. So too, the 40 days before Yom Kippur became an essential period of God coming closer to us. A time of rahamim - divine mercy, where Hashem is considered closer to his children than at any other time of the year. The month of Elul, therefore, which is the last month before Rosh Hashana and Yom Kippur – is a time when we should dedicate our thoughts to teshuva - repentance in all things and examine our deeds.

One of the most famous acronyms that we have to show this closer relationship with God at this time is Ani Ledodi Vedodi Li - I am for my beloved and my beloved is for me, a verse from Shir HaShirim - Song of Songs. The linkage to this verse implies that both we should all spend Elul thinking about our special relationship with God and how to improve it. Elul is a time to reflect on the year and prepare ourselves for Rosh Hashana and Yom Kippur. If we truly want to be ready for these Days of Awe we must put in the hard work before hand.

The Selihot that we recite are very powerful prayers. And the melodies that we sing them to are wonderful. I marvel every year at the excitement we Sephardim have to get up super early for a month to sing Selihot. But the powerful melodies and tunes carry us through for the month. At the end of Selihot we blow the Shofar to awaken in ourselves the call to teshuva. Here's an audio of SBH Hazan, Rabbi Frank Varon singing Kamti BeAshmoret and Ben Adam Ma Lecha Nirdam.

May we use this month of Elul to work on ourselves, to get closer to God and start our teshuva process.
Posted by askrabbihassan at 08:46 No comments: 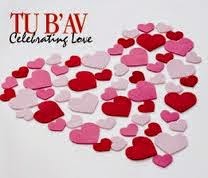 Tomorrow (Friday) is the 15th of Av also known as Tu Be'Av (not to be confused with Tu Bishvat). In modern day Israel this holiday has become in secular Israeli society as Israeli Valentine's Day or Chag Ha'Ahava. It is a day for many weddings. But what exactly is this lesser known holiday all about and what are its origins?

Tu Be'Av is first mentioned in the mishna in Masekhet Ta'anit:

"Rabban Shimon Ben Gamliel said: There were no holidays so joyous for the Jewish People as the Fifteenth of Av and Yom Kippur, for on those days, daughters of Yerushalayim would go out dressed in borrowed white clothing. And the daughters of the rest of the Jewish People would borrow from each other, so as not to embarrass those who didn't have. And the daughters of Jerusalem would go out and dance in the vineyards located on the outskirts of the city. And everyone who didn't have a wife would go there. And what would they say? Young man, lift up your eyes and choose wisely. Don't look only at physical beauty - look rather at the family - For charm is false, and beauty is vanity. A God fearing woman is the one to be praised."

The Gemara (Ta'anit 30b) asks a very basic question. Yom Kippur is a happy day because God forgives our sins. But what is so special about Tu Be'Av? Various Rabbis from the Talmud - Amoraim give six different answers.

1. It is the day on which permission was granted to the tribes to inter-marry.

A man named Tzelophad had five daughters. They beseeched God that they deserved to inherit the land of Israel because they had no brothers. God granted them land, however, the men of their tribe were upset and said when these ladies marry their lands will go to men of other tribes. As a compromise the five daughters of Tzelophad had to marry within their own tribe. This decree of marrying in their own tribe was lifted a generation later on Tu Be'Av.

2. It is the day on which the tribe of Binyamin was permitted to re-enter the congregation of Israel.
In the book of Judges there was a terrible civil war between the Tribe of Binyamin and the rest of the Tribes. After the war the other tribes made a decree that no one would give their daughters or sons to marry men and women from the tribe of Binyamin. That decree was annulled one generation later on Tu Be'Av.

3.It is the day on which the generation of the desert ceased to die.
(Fair warning that this is a Midrash and should not be understood literally) After the sin of the spies the Jews were punished with having to stay in the desert for 40 years till all the men over 20 died. According to Midrashic tradition, each year on Tisha Be'Av to commemorate the decree, all adult men dug their graves on the night of Tisha Be'Av. Each year 15,000 men died until the final year when no one died. They thought they had miscalculated the day so they repeated this until the 15th when they realised that the decree was over and they could now enter the land of Israel. I think that this Midrash is trying to convey the idea that for forty years the Jewish People were preoccupied with death and remaining in the desert. Tu Be'Av represents their mental shift to life and entering Israel.

4. It is the day on which Hoshea the son of Elah removed the guards which Yerovam the son of Nevat had placed on the roads to prevent Israel from going up to Jerusalem for the Chagim.
Yerovam was very upset with Rehovam for putting high taxes on the Jewish people and Israel was split into two kingdoms. The Kingdom of Israel (the Ten Tribes) and the Kingdom of Yehuda (The Tribes of Binyamin and Yehuda). Yerovam was concerned that his kingdom would not last if the tribes went up to Jerusalem in Yehuda's territory for Pesach, Shavuot and Sukkot. So he established idols and border patrols to prevent his people going to Jerusalem. This lasted for almost 200 years when Hoshea allowed his subjects to visit the temple in Jerusalem. He gave his permission on Tu Be'Av.

5. Rav Matna said: It is the day when permission was granted for those killed at Betar to be buried.

One of the tragedies of Tisha Be'Av was that all the inhabitants of the city of Beitar were killed. In an act of cruelty the Romans did not allow the Jews to bury their dead until Tu Be'Av. Despite this horrible act a small miracle happened that the bodies did not decompose. This gave the people hope that despite the horrific tragedy, God had not abandoned them.

6. It is the day on which they stopped cutting trees for the altar since from the fifteenth of Av onwards the strength of the sun grows less and they no longer cut trees for the altar, because they would not dry sufficiently.
This last one is very cryptic and requires a bit of explanation. Since the nights were longer and they didn't need to cut wood during the night, they would have more time to learn Torah.

Whichever reason is your particular favorite, traditionally this became a day of young people choosing their partners. It is a day of unity and comes as a healing period after the sadness of Tisha Be'av. It is the ray of light after the storm. It is a day for optimism and opportunity for new beginnings and new possibilities. It is a day of national harmony and a day of the Jewish People seeing their close relationship with God.
Posted by askrabbihassan at 09:23 No comments: