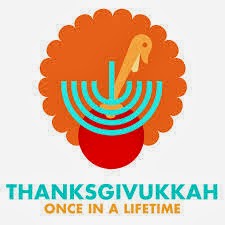 As we approach Thanksgiving and Hanukah everyone is busy preparing for these joyous festivals. The question is do we combine them into Thanksgivukkah or not? To clarify for those who thought I was anti-Thanksgiving, I'm very much looking forward to the holiday. As a born and raised Brit I'm excited for a new reason to eat Turkey and all the trimmings.

So should I have this great feast on Thursday evening or Friday night for Shabbat. Traditionally Jews have saved their Thanksgiving feast to have it with Shabbat. Although some Jews did not always celebrate Thanksgiving see this interesting halakhic piece here.

But with Hanukah this year it might be a shame to push it off. My in-laws are coming on for Thanksgiving but my father-in-law won't be making it till Thursday night so I think we'll probably wait till Friday night. It would be mean to leave him with Turkey sandwiches!

There are many pros such as they have similar themes of Thanksgiving to God. Hanukah for being saved from the Greeks and Thanksgiving for the wondrous gifts that God grants us each year. Some more cynical out there might be thinking that it's a good idea so that you don't have to meet up with relatives more than you need to!

We often associate Hanukah as a fun holiday of lighting candles, eating oily foods and gift giving. But it is a lot deeper than that. The Hanukah story is often portrayed as a struggle for national liberation ― the Jewish revolt against the Greek occupation of Israel. In reality it is much more complicated than that. The real conflict was not physical but intellectual. Hanukah was ultimately an ideological-spiritual war between paganism and Judaism. It was also not a struggle purely between Greeks and Jews. It was first a foremost a civil war of Jew against Jew. The initial impetus for the Greek attack against Judaism came from a certain splinter group of the Jewish people ― the Hellenized Jews.

At this time, we have a small but very vocal and powerful group of Jews, who align with the Greek authorities and who become Hellenized. They do everything the Greeks do. They send their children to the gymnasium, and they reverse their circumcisions ― a very painful operation ― since much of Greek culture is focused on the physical with sports being done naked the Greeks would consider them mutilated otherwise.

The revolt of the Maccabees ― which we celebrate today as Hanukah ― is as much a story of a civil war between Jews as against Greece. It's not a war for national liberation, nor is it a struggle for physical freedom ― it is a struggle of ideas. It is a battle against assimilation. If we celebrate Hanukah and Thanksgiving together we end up watering down the message of Hanukah. 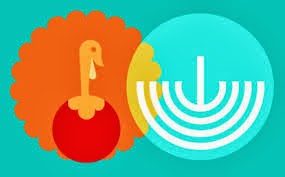 It isn't a question for me of whether to celebrate these holidays I plan to. I just will be having separate events to mark them. This picture shows there is a small amount of common ground but they are 2 separate holidays. I wonder what the Macabbees would think of some of the Thanksgivukah things going on!

Wishing you all a Happy Hanukah and a Happy Thanksgiving
Posted by askrabbihassan at 11:37