What are the origins of the mitzvah of Tzitzit? Why do men wear Tzitzit? Do they always need to be worn? Should they be seen? Why are there differences for Ashkenazim and Sephardim?

A few people have asked me to go into the commandment of tzitzit. So I thought I would write something although I must admit that there is far more to be written about them than I will be putting in this blog. Tzitzit are the tassels or strings that are tied to the corners of four cornered garments. Although when someone is talking about Tzitzit they normally are referring to an item of clothing called a Talet Katan which is worn under a man's clothing.

There are two sources for wearing Tzitzit the first is Bemidbar at the end of Parashat Shelach:

Speak to the children of Israel and say to them: They shall make for themselves throughout their generations fringes on the corners of their garments; and that they put with the fringe of each corner a thread of blue. This shall be fringes for you, and when you see it, you will remember all the commandments of the Lord to perform them. And you will not turn after your heart and after your eyes, after which you tend to stray.

In Devarim 22:12 it says גְּדִלִים, תַּעֲשֶׂה-לָּךְ, עַל-אַרְבַּע כַּנְפוֹת כְּסוּתְךָ, אֲשֶׁר תְּכַסֶּה-בָּהּ
You shall make for yourself twisted cords upon the four corners of your covering, with which you cover yourself.

On the question of should the tzitzit be seen or not this is one of the few time where Sephardic practice goes against Rav Yosef Caro (Maran). Maran writes in Shulkhan Arukh (O.H. 8:11) that one should wear the tzitzit over his other garments so that he can constantly see them and be reminded of the mitzvot. 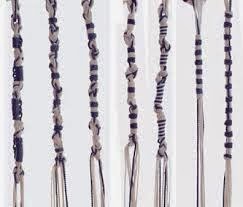 There are number of different ways for tying the Tzitzit. Most Sephardim tie10,5,6,5 which is Yud, hey, vav, hey, which spells God's name on the talet katan and they tie 7,8,11,13 on the Talet Gadol. Ashkenazim tie 7,8,11,13 for both. Rav Messas notes (Shut Mekor Hayim Chelek Bet Chapters 69 and 120) that there are many different customs for tying and they are all valid.

Are men obligated to wear Tzitzit or only when they are wearing a four cornered garment? The Rambam writes (Laws of Tzitzit 3:11) "Even though a person is not obligated to purchase a tallit and wrap himself in it so that he must attach tzitzit to it, it is not proper for a person to release himself from this commandment. Instead, he should always try to be wrapped in a garment which requires tzitzit so that he will fulfill this mitzvah. In particular, care should be taken regarding this matter during prayer. It is very shameful for a Torah scholar to pray without being wrapped in a talet."

Sephardic custom has been that only Torah Scholars  wear a Talet Katan. Rav Yosef Messas(1892-1974, Algeria, Morocco and Israel) wrote in Hod Yosef Hai (p.43) that since it is only worn out of piety since strictly one only needs to wear tzitzit if one has a four cornered garment, one should abstain from wearing them because:

1. They may become soiled in the bathroom
2. The strings could become pasul/invalid (because some of the knots became untied or strings were cut off) in that case one would be in breach of the mitzvah of having tzitzit on a four cornered garment. 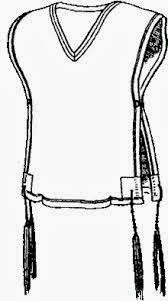 However, Ashkenazic custom is somewhat different boys are taught to wear tzitzit from as young as three. Indeed in some schools boys can be reprimanded for not wearing tzitzit even though there is no obligation to wear them. (Although, my dad told me that in Gibraltar the Hebrew school did enforce tzitzit wearing).

Although technically one does not need to wear tzitzit and historically in some Sephardic countries the practice was not to do so times have changed. In today's world we look to be able to do mitzvot whenever we can and Tzitzit is such an easy one to do especially if it is one of the T-shirt varieties. I encourage men of all ages to wear tzitzit as much as possible.
Posted by askrabbihassan at 22:45

Email ThisBlogThis!Share to TwitterShare to FacebookShare to Pinterest
Labels: Arizal, Ashkenazim, in or out, Maran, Sephardim, Tzitzit, yosef messas